In my grandathers obituary Wilfrid A, Lavoie. who died in Maine on June 24 1968 says he had a sister Mrs. Rosanna Rousseau.  Been trying to look up info on her or her family but i come up with nothing , It said she is from Pacome, Que, Was wondering why i have never heard of her before and if she had children.  My dad passed away so unable to ask . Was wondering if anyone out there knows or knew anything on Rosanna Rousseau. Thankyou...

My "brickwall" is the founding Griffin who appears in Salisbury MA around 1640 with wife Agnes (called Ann?) alongside.  There he had three children, Hannah, Mary and John, and off to NH and Maine. (Well, you know, northern MA back then). Philip is killed by lightening in Scarborough in 1667 (Welcome to Pine Point, Mr Griffin!) and the wife wisely took the kids back to Massachusetts before the Indians razed the settlement.  Later, John's children headed north and their many families became… Continue

I am seeking photos of my family and "the farm" in Maine.  My ggrandfather, Leslie Griffin b. 1878 in Livermore, inherited the property from his mother Clara Morse.  My grandfather, Richard Griffin b. 1900 in Somerville, MA, summered there, and I did too.  There he met and married his wife, my grandmother, Hazel Norton b. 1901 in Livermore, in 1920.

I would also welcome any stories that you can offer of the Griffin, Norton and related families.

looking for anything on Stephen D. Lanpher - he is my G.G. Grandfather - born in 1822 in Buksport - married Sarah Knowlton in 1854 in Sangerville, Piscataguis - sailed to California somewhere around 1860 - helped found Oceanside, California - can not find his father and mother

Nortons of York County ME

Thanks to a member of  Maine Genealogy Net, Jean P,   I might have found out why I can find no information on my 4th GGrandfather Nathaniel Norton's parents. Nathaniel was  b. 1 Aug 1762 in Sanford, ME according to Rev War records. He married Hannah Sawyer and  all but one of their children stayed in Maine. Their son, Reuben, is my ancestor and the only one who left ME.

I am trying to find out when William Wallace Brown died and where he and his wife, Louise Augusta Brown, are buried.He was born 18 February 1847 on West Isle, NB but came to Calais, Maine with his parents when he was about five. Wallace spent the rest of his life in Calais. He had a crockery shop and also was an Indian agent.

I'm looking for information on the first wife of Hezekiah Brooks, Martha J. Duren (although I suppose it could be Duran since his second wife was a Duran). They were married in 1844 in Penobscot County. Any info on Hezekiah's parents would also be greatly appreciated. 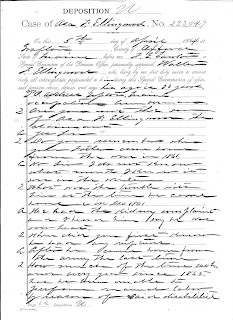 asked to do so, of course, but considering the little amount of…

The next witness was his cousin Oliver Pratt. On the affidavit he

carriage maker by trade and painter."

Q: How long have you known the claimant Asa F. Ellingwood

A: Ever since we was a little boy

Q: Did you ever work with him

lifting part of the work

Ellingwood's Civil War Pension file, I talked about the revelation in the

testimony of his cousin James Barrows that he(Barrows) had testified

before in the case and in fact there were two previous afidavits!  When

I checked the testimony of several other witnesses on Asa's behalf, I found

they had also testified on earlier occasions.

So how did I miss…

According to the statement,  James "says  his age  52 years, P.O. address

Q: How long have you known the claimant Asa F.Ellingwood

Q: Did you work with him at that time

Q: What was his physical condition in those…

I have finally found a tidbit in my search that has caught me by surprise. And not really in an honorable way in my mind.

Have you ever found some information…

I was able to download a zip file to my desktop but cannot open it. Do I have to order a hard copy from the Maine State Archives or is there a simple (free) way to access the information? William F. Irwin v. Catherine McKennon Irwin.

Looking for Info on Peter M. Arsenault of Mexico, Maine. It says he was born Prince Edward Island, Canada. His wife was Marie Emma Arsenault (Richards), His father was Hubert and his mother was Mary. really looking for Info on Hubert who seems to have been born PEI about the 1830-1840's Any help would be appreciated.

We are all familiar with the Boston Tea Party, Lexington and Concord, and Battle of Bunker Hill, but a lesser known event probably had an important role in fanning the flames of patriotic feeling that galvanized the colonials to fight for freedom from England.
The event was the Burning of Falmouth (now Portland) Maine on October 18, 1775.
Maine, then a part of…
Continue

Common name and so many places...

my adventure has taken me to so many different places to look at records. Apparently my family is all over NE Massachusetts and they frequently have births, marriage or deaths listed in more then one VR. It sure makes it easier to find information but makes it all the more unusual that I cannot find any information about the death of my 6th Great Grandfather - Captain Israel Davis. Not a thing…

What are believed to be two human skulls and bones were discovered this week in Washington Township, Franklin County.

The skulls were found on the side of an embankment beside an old road, Franklin County Sheriff Lt. Niles Yeaton said.

Police suspect there was a farm in the area with a family burial ground on it, he said. There are old cellar holes in the area.…