have had such good luck with my family tree i am going to try to help a friend...

the info she has--either betsey or elizabeth linscott born appx 1754 and died aug 16 1819..she was the second wife of benjamin goodwin who was born in berwick nov 4 1754 and died may 18 1842...any info would be appreciate..thanks so much in advance

The Geneabloggers daily prompt of Shopping Saturday got me thinking about my earliest shopping experiences. When I was born, we lived on the same farm as my dad's parents. There were two houses with the barn dooryard between the two. I was the first grandchild and my grandmother spoiled me rotten. She took me everywhere with her. One of her favorite places to shop was the Mammoth Mart in Rumford (Maine). We would go in her VW bug and my favorite place to ride was in the well above the motor…

Catherine Cornish and possibly Thomas Footman and/or John Hull, Jr. murdered Richard Cornish, Catherine's husband. He was found in the river with a head wound and a pole stuck in his side. His canoe had been filled with clay and sunk. He bled to death. My 12th great-grandfather, Roger Garde, presided over he trial. Thomas Footman is my 10th great-grandfather and her suspected lover. (See disclaimers below)

Catherine was indicted, tried, and hanged for her husband's murder. Catherine…

A Wall of Fire

I'm sure you've heard the term "brick wall" in genealogy. Well, I have a  "fire wall." I am trying to find the parents of Elizabeth "Betsy" Clark born 9 Oct 1758 in Falmouth (Portland) and died 23 Feb 1839 in Minot (Auburn), according to records in Woodstock, Maine. Betsy married Lazarus Rand just about time that the Revolutionary War broke out. She was recovering from the very difficult birth of their first child, James, when Lazarus sailed on the Bagaduce Expedition (more on that in…

These pages are from an autograph book belonging to my great-grandmother, Mabel C. (Morgan) Dunham (1879-1960). The entries end around the same time that she obtained her second autograph book. 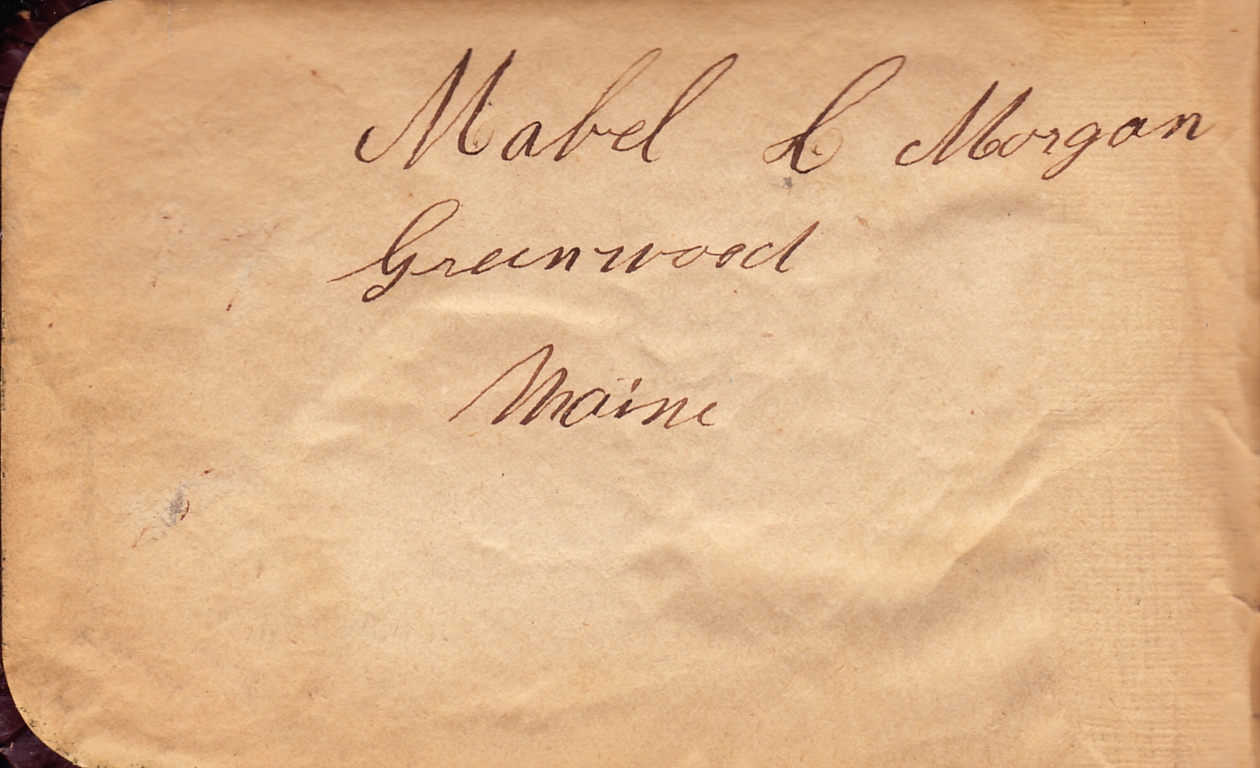 Would like to correspond with descendants of Henry Trussell in Maine. My great grandfather was Augustus Joel Trussell, b. Belfast, 1838. I'm happy to share data on the Trussell and other lines.

I have found three differernt Oliver Robbins in Woodstock, Maine All three show up in the

History of Woodstock, Me.: with family sketches and an appendix pages 90-92.

I assume two are father and son. So where does the third Oliver Robbins fit in. They are:

Oliver Robbins Jr. - b. in Sumner?

Do you live in Maine, or want an excuse to visit this great State?  How about joining the Maine Genealogical Society for our annual conference in September?

To learn more about the conference, visit the official conference website:

My name is Stephanie Thompson Smith and I too have been trying to find out information on the Thurston family from Clinton, Maine. My 4th great grandfather was John Thurston who was born abt 1772 and died a pauper in Clinton, Maine on May 9, 1968. I know that he was married to a 'Mary'. His daughter Hannah is the line I descend down through. I am trying to find out where he was born and who his parents are. It would also be nice to know what his wife's maiden name was. If you have any leads…

I have just added to my Calvin T. Towle family line with families of Addison Osborne (m. Nancy Lydia Towle) and Herbert Towle Cox (m. Mary Towle daughter of Frank H. Towle). Herbert Cox/Mary Towle had at least 9 children, some of whom might still be alive. Family resided in Lewiston. Osbornes also Lewiston, burials in Riverside Cemetery. Descendents of Gertrude Osborne included two daughters last name Stevens . Please contact me if you have knowledge of these families.

has any body done any research from Germany? I have some research on a Josepha price maiden name unknown her first husband was last name was braley 2nd husband was harold price last known residence was Anson maine. Josepha was smuggled out of Germany as a child. I was wondering if there is much data from germany during hitlers time or is it pretty much a dead end? I have heard that it is very hard to get any records from Germany.