Look Before You Leap! The Accidental Death of Edward M. Carter

Edward Carter, aged 43, of Bethel died at Ste. Marie's hospital yesterday morning from injuries sustained when he jumped from a wagon on the Lisbon-Lewiston road about midnight Sunday directly into the path of an automobile owned and…

The Geneabloggers daily prompt of Shopping Saturday got me thinking about my earliest shopping experiences. When I was born, we lived on the same farm as my dad's parents. There were two houses with the barn dooryard between the two. I was the first grandchild and my grandmother spoiled me rotten. She took me everywhere with her. One of her favorite places to shop was the Mammoth Mart in Rumford (Maine). We would go in her VW bug and my favorite place to ride was in the well above the motor…

Catherine Cornish and possibly Thomas Footman and/or John Hull, Jr. murdered Richard Cornish, Catherine's husband. He was found in the river with a head wound and a pole stuck in his side. His canoe had been filled with clay and sunk. He bled to death. My 12th great-grandfather, Roger Garde, presided over he trial. Thomas Footman is my 10th great-grandfather and her suspected lover. (See disclaimers below)

Catherine was indicted, tried, and hanged for her husband's murder. Catherine…

A Wall of Fire

I'm sure you've heard the term "brick wall" in genealogy. Well, I have a  "fire wall." I am trying to find the parents of Elizabeth "Betsy" Clark born 9 Oct 1758 in Falmouth (Portland) and died 23 Feb 1839 in Minot (Auburn), according to records in Woodstock, Maine. Betsy married Lazarus Rand just about time that the Revolutionary War broke out. She was recovering from the very difficult birth of their first child, James, when Lazarus sailed on the Bagaduce Expedition (more on that in…

The historian in me loves old things and the genealogist in me gets really excited when those old things are directly linked to my family. This is a map of the "Township of Holmes in the County of Oxford and the District of…

Augustus Mellen Carter was a surveyor for the Brown Company in Berlin, N.H and for railroad companies in Western Maine. He was born and raised in Bethel, Maine and after fighting in the Civil War, he began his surveying career. We are fortunate to have a number of items relating to him still in the possession of family members. This is a compass and case that belonged to him. I also scanned a Woods Cookbook that came from his possessions. It's pretty funny to read the recipes and interesting…

My cousin, Bill West, sent away for the Civil War pension application for our mutual ancestor, Asa Freeman Ellingwood. Last summer he transcribed the file and shared it with the family and posted a substantial portion of his transcription on his blog. The bulk of the testimony involves various persons, relatives of Asa and others who knew him, testifying as to his health when he returned home after his discharge in…

My primary blog at www.mymaineancestors.blogspot.com has more pictures.

I was working on genealogy and looking for some possible Revolutionary War ancestors when I hit the jackpot. Dominicus Smith, my 5th great-grandfather, on the Yates line lived in Biddeford, District of Maine and enlisted in the army in 1776. Last night I downloaded images of his application for a…

I am so lucky to have had wonderful strong female role models in my life. My great-aunts are two of those role models.

Rebecca Williamson Carter Bailey - Aunt Becky was born in 1913. She graduated from college and got a master's degree. She spoke French…

William Yates was the immigrant ancestor of the Yates line in my ancestry. He moved to Maine from Portsmouth, NH. He is credited with founding the town of Greenwood in 1802. He settled on Patch Mountain where he built a rudimentary log cabin until a frame house was completed a few years later. He was a farmer and a Methodist preacher. Some sources have William coming to the…

Timothy Carter was born November 27, 1768 in either Ward, Massachusetts to Timothy and Sarah (Walker) Carter. He was a descendant of the immigrant Rev. Thomas Carter of Woburn, Massachusetts. He is my 4th Great-Grandfather and the source of my earliest interest in family history. Howard Lapham in The History of Bethel,…

Once again, I owe this find to Chris Dunham of Maine Genealogy Network. It comes from the Lewiston Evening Journal of 5 November 1878 and describes a near tragedy for the Carter family. … 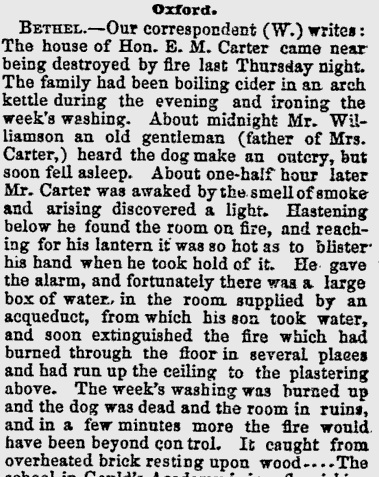