about blowing up a mountaintop and handling a team of


And he was still a teenager at the time! :

In this installment, My granduncle Clarence P. West talks

about driving logs over the Azicohos Dam, and describes

how a wad of chewing tobacco saved his life:

“We used to sluice here, and when I started they had to

Here's more from the 1975 interview in Maine Profiles of my

Granduncle Clarence West by Lynne Franklin. In this excerpt

he talks about memories of P.C. Ripley's encounters with

game wardens and a school principal (the "school pa").

Clarence also recalls how he got his job at the Aziscohos

as he looked back on his life. Recently Alan Johnson,

the area in Maine where my West ancestors lived, sent
me a copy of another interview with Clarence. This one… Continue

ANOTHER MAINE SONG FROM NICK HUMPHREY

Last week singer-songwriter Nick Humphrey shared with us his

Check it out at and enjoy it…

A few weeks back I shared a poem by Maine poet Holman Day,

entitled "The Wangan Camp" which was about a company store

in a lumber camp.

Well, today, I received an email from songwriter/musician Nick

Humphrey who wrote a song a few years ago based on the poem.

Here's a link to Youtube to a video of Nick performing the song.

I enjoyed it, and I think…

"THE WANGAN CAMP" BY HOLMAN DAY

I've blogged before about American regional poetry and its value

in understanding the lifestyles and times of our ancestors. Every

region of the country had poets who wrote about local events

and often in the language peculiar to their region. One such

The following poem talks about a Maine lumber company's "company

While going through the process of entering Ellingwood family

information from Florence O'connor's book to my Ancestry.com

family tree, I have come across entries that have piqued my

curiosity. I always keep in mind that Florence did all her research

the old fashioned PC (pre-computer) way and didn't have the

online resources I use today available to her, so I try to find

what I can and fill in the blanks, so to…

I'm starting off with his testimony from his Pension Request

file as given to Justice Samuel Putnam :

Massachusetts .
On this sixth day of May 1818 Before me the subscriber one of

the Justices of the…

THE CASE OF FRED R ELLINGWOOD

One of my ongoing genealogy projects is entering the

information on my Ellingwood ancestors and relatives onto

book "The Ancestors and Descendants of Asa Freeman

with the descendants first because there are so many of

them and there are sources and images of records

that aren't available for earlier…

ELISHA HOUGHTON: "ON GUARD", "ON COMMAND" AND BUSTED BACK TO THE RANKS

my 5x greatgrandfather Elisha Houghton, including one which

told how he lost his rifle in the aftermath of Bunker Hill. Looking

over his service record and the muster rolls for his regiment, it

transcribing his Pension Request file. But the busy Christmas

WITH THANKS TO MY ANCESTORS

I first published this list a few years back, but in honor of the

4th of July I'm publishing it again.We know about Washington

and Knox and Lafayette, but we should never forget that it

was the unknown citizens who served under them who fought

and bled to win us all our freedom.

The italicized names are those whose Pension Files I've found.

So last night after posting my response to Randy Seaver's SNGF

of my Barker ancestors through FamilySearch's Record Search.

Nathaniel Barker and his wife Huldah Hastings, I found this

Last week I had success finding information on my mother's

family at FamilySearch Record Search and since then I've

gone back and tried looking up other family members. This

name in the search box and Maine as a location. I was

hoping to find a record of his marriage to my great

ANSWERS AND QUESTIONS ABOUT THE WEST BROTHERS

Ancestry.com collection of the Federal Nonpopulation

thought to how my West ancestors made their daily living.

I knew the regular census images said they were farmers

which seems to have ended with my great grandfather P.J.

West. My grandfather Floyd Earl West Sr was a lumberman

and his brother Clarence…

THE WHEREABOUTS OF LEONIDAS WEST

I've been discussing three of John Cutter West's surviving sons
lives in the 1870s and 1880's using the Federal Nonpopulation
Schedules 1850-1880 for the state of Maine. Asa, Jonathan and
Hiram West did quite well for themselves, in my estimation. But
there was a fourth brother, Leonidas. Where was he in all this?

The answer is simple: like many young veterans of the Civil War,
he went West. Leonidas was the youngest son and probably
didn't receive a very… Continue

All genealogists have one: a brickwall. Alright, there may be a lucky
few upon whom the Gods of Genealogy have smiled who don't have a
brickwall. These are probably the same people who got A's on their
trigonometry finals. But the rest of us, we have brickwalls, ancestors
whose names, or places of birth, or parents elude us. Finding the
missing information and smashing through that brickwall to the
ancestors beyond it is the Holy Grail of genealogy. And… Continue 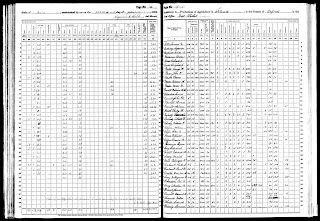