Discovering the Upton (Maine) Historical Society page on Facebook has

fun sharing pictures back and forth. One particular set of images were of

special interest to me.

When Dad married my Mom he converted to Roman Catholicism from

Protestantism. I don't know which Protestant denomination Dad was

brought up in; it just never came up in any conversation that I can recall

growing up. But these images do tell me where my great grandfather West

and great great grandfather Ellingwood worshiped. They show a list of

Church  in the summer of 1899. Judging by the handwriting it appears

to have been by one person who was in charge of collecting the money.

"We, the undersigned, agree to pay the sums placed opposite our names

for the support of preaching in Upton during the summer of 1899." 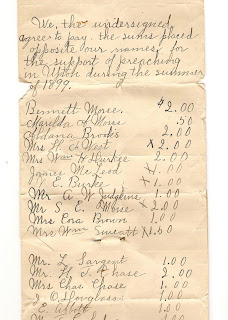 Most of the names on this page are my cousins by blood or marriage. The

one that jumped right out at me, though, was Mrs H. F. West. That would

As I posted last year, Hiram owned a grist and lumber mill so Arvilla was 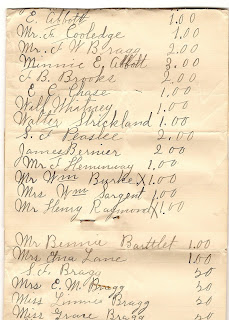 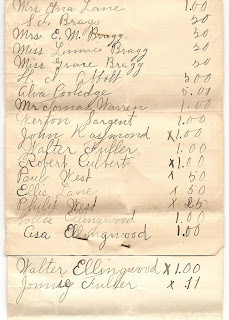 This last page was the most interesting to me: great granduncle Paul Leroy

granduncles Hollis and Walter all gave $1.00.

Coincidentally, a group of volunteers have been repairing and refurnishing the

So while I'm not sure if my Dad worshiped there, I do know our ancestors did!

Hello Bill, ty for sharing!! The Sargent's and Fuller's you have found listed on these pages are my maternal ancestors. Do you happen to know the name of George ILSLEY?