Back when I first started doing genealogy online I made contact with Lewis, who is

descended from my great granduncle Paul Leroy West.  Then the motherboard

on my computer crashed and I lost everything  on it, including email addresses

(and learned the hard way to back up EVERYTHING!). Recently Lewis found me

last time we'd been in touch.

Lewis is sharing some family pictures with me and one of them is this one: 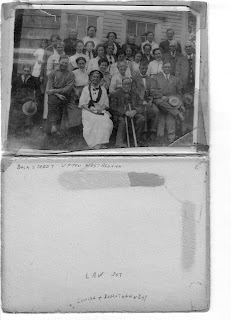 The caption reads "Back Street  Upton  West Reunion". Down at the

bottom are the names "Louisa +Jonathan West". Those are my great great

grandparents and they are the elderly couple in the front row.  There are

no other names given for the people assembled for the picture, nor a date

for when the picture was taken. But I can make a few guesses for both.

the only other picture I have of Jonathan and Louisa: 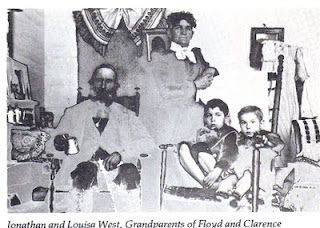 The two boys are my grandfather Floyd West and his brother Clarence. My

to be around 5 or 6 years old, so that would date this picture between 1898

1915 to celebrate their 50th anniversary.

But who else is in the picture with them?

Jonathan and Louisa had three sons: my great grandfather Philip J. and his

brothers Paul and John. I believe they are the three young men seated

in the row behind Louisa and Jonathan. Out of the three of them, the

man with the bangs is my guess to be P.J. based on a later photo:

As for the others, I've no idea as yet. I do know that Jonathan and Louisa

might be among the younger women. It's another family puzzle to work at!

Thanks Lewis for sending me this picture!

Was the young man on the left sitting Albert (Bert) Tidswell?  Clara's son by Charles Tidswell.

Could the man in the chair on the far left (hat on knee) have been Albert Tidswell?  He did have curvature of the spine and died young (age 21 in 1909).  Just a thought.