My recent trip to Portland, Maine paid additional dividends.  I was able to go to the Portland courthouse which keeps the land records for Cumberland County, Maine.  I wish I could have spent more time there, but I was able to obtain records of how John Armstrong and Betsey Woodbury Dyer Armstrong's family land was divided and distributed.

Family lore indicates that land was granted to the Armstrong family in 1757 for South Portland, which is now Cape Elizabeth, Maine.  This land had been kept in the family for well over 100 years.  There are records that indicate additional land grants which go back even further, but that will be the subject for a future post.

Prior to marrying Betsey, John Armstrong has been married to Rhoda Miller.  John and Rhoda appear to have had three children:  Simon, William and Mary Armstrong.  Both Simon and William died in their 20's.  Rhoda Miller Armstrong died fairly young in 1816.

John Armstrong remarried about a year later in 1817 to Betsey Woodbury Dyer.  Betsey was a widow.  She had at least three children from her first marriage with William Dyer including:  Woodbury Dyer, William Dyer and Benjamin Dyer.

John and Betsey had at least 6 children together including:  Eben, Lucy, John B, Israel, Arthur B and George P Armstrong.

The Armstrong family land holding appeared to be about 475 acres which was divided into 8 equal sized lots for the following heirs: 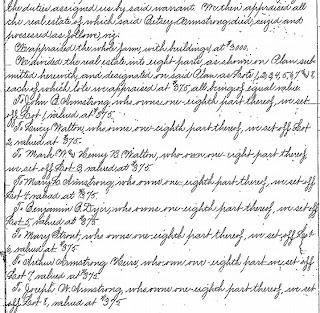 Each lot was approximately 135ft of frontage on Shore Road and the lot went back approx. 19,000 ft.   These were very long thin lots.  Each division was roughly 60 acres. 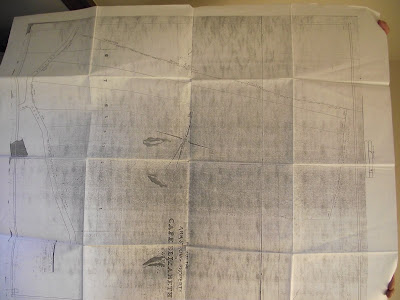 The Armstrong family house at 905 Shore Road is still there today.

For more information my family research check out my blog at http://familypilgrimage.blogspot.com/