Timothy Carter was born November 27, 1768 in either Ward, Massachusetts to Timothy and Sarah (Walker) Carter. He was a descendant of the immigrant Rev. Thomas Carter of Woburn, Massachusetts. He is my 4th Great-Grandfather and the source of my earliest interest in family history. Howard Lapham in The History of Bethel, Oxford, Maine: 1768-1890, Formerly Sudbury, Canada, says that when Timothy was 11 years old, his father, a house carpenter, fell from a building and was killed instantly and Timothy was sent to live with a family in Sutton. Lapham describes him as having "ability and pluck." While Lapham doesn't name the family that took Timothy in, he does provide one clue when he says Timothy worked for "the man in whose family he lived and who was a dealer in oil."

Timothy's first wife was Frances "Fannie" Freeland, daughter of Doctor James and Mehitable (Mellen) Freeland. She was born September 4, 1771 in Sutton, Massachusetts. They met when Timothy came to study medicine under the tutelage of her father. They were married in 1793.

I'm not sure why they chose to leave Massachusetts and settle in Maine but in 1799 they moved to Bethel, Maine - the part of town along the Androscoggin River called Middle Intervale. Although this is several miles from the center of town now, Lapham calls the area a "center of influence" that was growing more rapidly than other sections of Bethel. At that time they had three small sons, Lawson, Galen and James. Family legend is that Frances was pregnant at the time and made the trip on side-saddle while pregnant with their fourth son, Timothy Jarvis. I remember seeing her side-saddle when I was growing up but I don't know where it is now. After moving to Bethel and giving birth to Timothy Jarvis, Frances & Dr. Timothy had three more children, Luther Cullen, Frances and my 3rd great-grandfather, Elias Mellen. 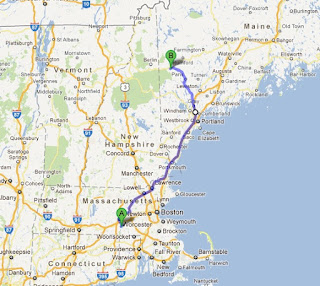 Google Maps says it is 212 miles on present-day roads from Sutton to Bethel. By car it is 4 hours and 4 minutes but I'm sure it was a lot more challenging to make the journey on horseback while pregnant.

Eva Bean in her book East Bethel Road,  calls Dr. Timothy Carter "the first physician to settle in town" and says they lived first in a home built by Enoch Bartlett that was later replaced by the house my grandparents lived in for most of my life. The family home built by Dr. Timothy is still in my family and the current resident is my cousin, John Carter. This house is called the Brick End House because it is indeed brick on one end. Frances died while the house was being built. She was only 44 years old and left behind six sons and one daughter. The five oldest sons married and moved away from Bethel but the youngest, Elias Mellen Carter remained and lived in the Brick End House.

Dr. Timothy remarried before 1823 (first child born in 1823) to Lydia Russell. They had five children, Lydia, Sarah, Abigail, Theodore, and Benjamin - all of whom made Bethel their home. Portraits of Dr. Timothy and Lydia hang in the front parlor of the Brick End House. Dr. Timothy died February 25, 1845 and is buried across the road from the Brick End House in the Middle Intervale Cemetery. His family plot is surrounded by a wrought iron fence a few rows into the cemetery and just to the left of the gate. 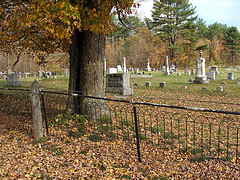 I plan to go this summer and get better pictures from the cemetery specifically of the graves of my ancestors but this is a generic photo of the cemetery.

Howard Lapham in The History of Bethel, Oxford, Maine: 1768-1890, Formerly Sudbury, Canada, says that prior to the arrival of Dr. Timothy, people were left to their own devises or had to send to Fryeburg for a doctor. Lapham also tells of two other physicians who briefly practiced in Bethel. One was a German named Dr. Martin who came during the Revolutionary War with Baron von Steuben and followed some soldiers to settle in Maine. He was "a man of intemperate habits to such an extent as to disgust the people, even in those days of free frum and its liberal imbibation." In 1790, Dr. John Brickett was in Bethel but he married a woman from Haverhill, Massachusetts and returned to practice in that town.

In addition, many in Bethel benefited from the natural remedies and treatments of Molly Ockett (her name is spelled in a variety of ways), a local Native American woman who traveled around western Oxford county tending to people. Every July, Bethel has a festival named in her honor - Mollyockett Day. She is a very interesting woman and I'll write more about her in a future post. Lapham says she "felt deeply chagrined when a physician came, and she realized she must seek a new field of work." This seems a bit extreme as I'm sure there were plenty of families in need of services to keep both of them busy.

I have a bit more information about the practice of Dr. Timothy and information on his oldest 5 sons who went on to lead very distinguished lives, more about Elias Mellen Carter, and more about Molly Ockett so this post will be continued...