We are all familiar with the Boston Tea Party, Lexington and Concord, and Battle of Bunker Hill, but a lesser known event probably had an important role in fanning the flames of patriotic feeling that galvanized the colonials to fight for freedom from England.
The event was the Burning of Falmouth (now Portland) Maine on October 18, 1775.
Maine, then a part of Massachusetts, was not the hotbed of revolution that Boston was, but did have some limited mob actions and riots in reaction to taxation and Tory activity. In many ways Falmouth was seen as a stronghold of loyalists, who continued to profit and trade with England.
Under orders of British Admiral, Samuel Graves, to burn sea ports from Boston to Halifax, Captain Henry Mowatt, sailed to Falmouth with the specific purpose of burning the town.
Here is the recounting of the event by an eye witness, Pearson Jones, which appeared in many colonial papers as a dispatch from General George Washington. 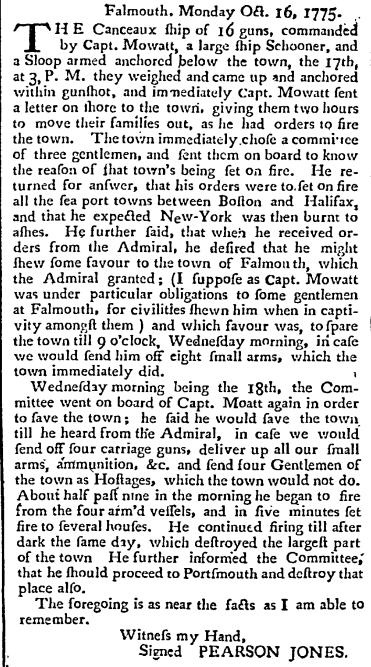 The fire destroyed more than three quarters of the city, turning to ashes more than 400 buildings and houses, leaving over 1,000 people without homes with winter coming soon.
Here is George Washington's reaction to the burning of Falmouth in an excerpted letter to  the Committee of Falmouth:

"The desolation and misery which ministerial vengeance which has so lately been brought on the town of Falmouth, I know not how sufficiently to detest. Nor can my compassion for general suffering be conceived beyond the true measure of my feeling...add my wishes and exhortations that you repel every future attempt to perpetuate like savage cruelties... I am, gentlemen, your obedient and humble servant." George Washington

While many historians do not seem to give this event much notice, it can not be underestimated that the accounts of the unprovoked attack and burning of Falmouth appeared in all the major colonial newspapers and  would have raised anger and fear of the despotism of England.  In many ways, the burning of Falmouth was a pivotal atrocity and indicated that England was capable of similar act of barbarism in any other seaport towns.
What is my historical connection to the event of the Burning of Falmouth?
My 4th Great-grandfather, John Armstrong, witnessed the event and it had a dramatic impact upon him. It provoked him to volunteer for military service.
John Armstrong of Cape Elizabeth, Maine enlisted November 1775 and served until February 26, 1779. He retired as a lieutenant from the Continental Army (I am trying to dig up exploits of the regiments in which her served for future posts).
This is the perfect time of the year to remember those patriots who fought and sacrificed to secure the birth of the United States.
For more posts on my Maine family, please visit my blog at http://familypilgrimage.blogspot.com/
Sources:
"Falmouth Neck in the Revolution",Nathan Goold,1897,P.34
"Massachusetts Soldiers and Sailors of the Revolutionary War,Vol.1",1896, Pg.294