and his wife Louisa Almata Richardson I discovered that the Upton, Maine

Historical Society has a Facebook page. The picture had been taken on

page might recognize some of the other people in the picture. Unfortunately

no one has as yet but there was another benefit, namely meeting some

more cousins. One of them was Deborah Judkins who shared three photos

of her own at the site. 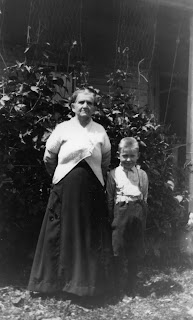 This one is Louisa Richardson and Sidney Abbott. They were doubly related,

since Sidney is Louisa's great grandson on his mother's side, but also her

Sidney's great grandmother on that side. 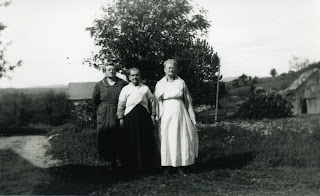 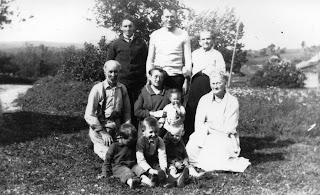 In this group picture the adults are (front row) Albert Judkins, Bertha Morse

Judkins and Florence Morse Abbott. In the back row are two men who

probably are cousins from the Greenleaf family and then Louisa Richardson

West. One of the boys in front is Sidney Abbott. The Judkins are Deborah

Judkins' great grandparents and she is my fourth cousin!

Thanks Deborah for sharing these with me!

And for those reading this, don't forget to check and see if there is an online

presence for those towns and cities where your ancestors lived. You might