I thought I knew where my 2nd Great-grandfather, James H Fuller, had been born and I wanted to see if I could find a record that definitively named his parents.  So, I decided to see if I could get a copy of his naturalization records.
Naturalization records (petitions for our ancestors to become citizens) are one of the best resources to find the birthplace of an ancestor and when they arrived in the US, but they can also be difficult to obtain.  Ancestry.com has numerous naturalization resources, but at this time, has limited actual documents.
The major challenge when tracking down naturalization records is that Before September 27, 1906, naturalization was carried out by thousands of courts—federal, state, county, local—and each court kept its own records.   So tracking them down can be a daunting task.
If you are researching ancestors who may have become citizens while living in New England, you have a big advantage.  The National Archives office in Boston has obtained just about all the naturalizations from all of the New England courts (excluding Connecticut) for the time period between 1790 and Sept 1906.
It is an interesting story on how all these records ended up in the National Archives.  During the 1930's, it became a requirement to be employed in many of the "New Deal" government projects that you needed to be citizen.  To assist those who needed to document citizenship, the Immigration and Naturalization Service (INS) used a "New Deal” project to photograph naturalization records of the various courts of Maine, Massachusetts, New Hampshire, Rhode Island, and Vermont.
By 1961, the INS had no further use for these records and because they were copies they planned to destroy these copies of those original documents.  The records were even loaded on a truck to be taken to a pulp mill near Haverhill, Massachusetts to be recycled.  But because of the type of material used (called dexigraphs) they couldn't be used by the mill and were returned to the INS.
A petition was sent to the local National Archives whether they would want the records or they would be destroyed. The National Archives decided to accept the records, so the paper mill’s loss is our gain.
You can even order these records online.
Key points of information which are contained on these documents include:
Here is an excerpt of my 2nd Great-grandfather, James H Fuller's Naturalization document (it didn't copy very well).  It did confirm for me that he was born in Windsor, Nova Scotia, but unfortunately, it didn't name his parents.  I think the newer versions of naturalization documents include additional questions such as name of spouse, spouse's origin, name of children and children's birthdates. 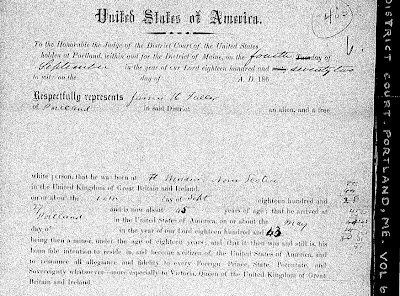 It is also important to note that many immigrants to the US never became citizens.
To have some idea when your ancestor became naturalized check US Census Records from 1900-1930.  Each of these census records state whether the person is a citizen "Na" or alien "Al" and gives a date for when they became a citizen.
How to request Naturalization documents from the national archives and what it costs?
I would love to hear your comments regarding any great information you have found on your ancestors immigration records.
You can check out more of my blog post on my family history searches at http://familypilgrimage.blogspot.com/