The Death of a Sailor - James Henry Fuller

One of my first blog posts was about the "Loves of a Sailor - James Henry Fuller".   James H. Fuller was my great-great grandfather and I have tried to uncover as much as I can about him.

I know he was born in Windsor, Nova Scotia on Sept 12, 1827, but I really struggled to find out when he died.  I know he didn't live forever, so where did he die?  It wasn't in Maine, Maine has very extensive birth, marriage and death records online and I should have found it rather easily if he died there.  But if he died outside of Maine, where could it be?

Fuller is a fairly common name.  How am I going to prove that any James Fuller death records I found outside of Maine is MY James Fuller?

My breakthough came while researching his daughter, Elizabeth Fuller.  In my research, I found her marriage record to Robert Armstrong from Oct 22, 1910.  It indicated that Elizabeth's father lived in NY.

When I did a census search for the 1910 US census, I found a James Fuller listed as an "inmate" at Sailor's Snug Harbor.  Now this concerned me that my great great grandtather might have ended up in debtors prison before he died. 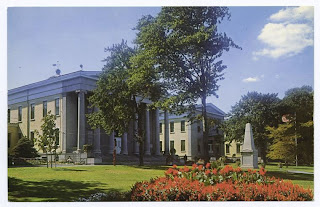 This was my best lead, so I tried to find out more about Sailor's Snug Harbor.  It turns out that it was an old age home for sailors.  Since this was before social security, people didn't really retire, they just became too old to work and either lived with family members or relied on charitable organizations to care for them.

When doing my research of Sailor's Snug Harbor, I uncovered that it didn't exist anymore.  It has been turned into a museum and botantical garden.  However, all their records had been donated to the SUNY Maritime College.  Sailor's Snug Harbor had an application process for acceptance to live there.  I contacted SUNY to see if I could obtain any of those records.

Sailor's Snug Harbor has an interesting history.  Captain Robert Richard Randall established Sailor's Snug Harbor in 1801 through a bequest in his will.  He was a wealthy merchant who had inherited much of his wealth from his father, Thomas Randall.  Thomas Randall was a privateer, which was a state sanctioned pirate.  During the many wars between England and France in the 1700's, he preyed on French shipping and was extremely effective capturing French ships to amass a substantial fortune.  His son recognized the plight of  sailors as they aged and could no longer work on the sea.  It was his idea to establish Sailor's Snug Harbor.

Here is a link to an article which appeared in the Haper's Bazaar in 1873 about how the retirees are treated at  Sailor's Snug Harbor.

Sailor's Snug Harbor was established in Manhattan, but eventually moved to Staten Island on 83 acres of land and once housed as many as 1,000 retired sailors.

SUNY provided me copies of the original application.  It was a wealth of interesting information including the fact that James H. Fuller's first work on a commercial ship was 1843 on a trip from Kingston, Jamaica.  His last work on a ship was in 1905.  He worked for 62 years in commercial shipping.  Most of that time was spent on masted vessels traveling between Portland, Boston and New York.

I did find he died at Sailor's Snug Harbor on December 21, 1917 at the age of 90.  Which is amazing!  A life at sea is a hard one and not one that is well known for its longevity.

Here is a copy of the death certificate obtained from SUNY Maritime. 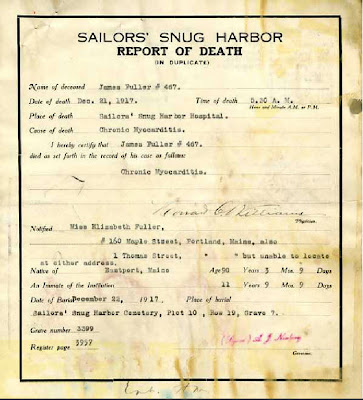 I have always been drawn to the sea and I have always felt like I should make some attempt to learn to sail....now I have some idea that sea water may run in our veins.

For more information about the Portland Fullers or if you have information to share about James Henry Fuller's parents David and Mary Fuller, please check out my Blog:  http://familypilgrimage.blogspot.com/