This is a wedding photo of Edwin "Ed" Rice and Amy Slack taken on their wedding day in NH.  Edwin sent the photo to his parents Clyde and Etta Rice back in Northfield, Maine.  This was a second marriage for both, Amy was first married to Elmer Glen Kidder and they had several children together.  As far as I know Amy and Edwin did not have any children together.  Edwin and Amy were married on 4 March 1911 in Grantham, , New Hampshire.  Edwin's first wifes name was Bertha, last name unknown.

This is a photo of the back of the wedding photo, print is faded but can still be read.

Below is some tax information I found at the Maine state Archives in Augusta, Maine for Judah Rice.

Both the Rice brothers, Judah and Freeman Rice purchased the Rice farmstead and lived there together for several years, raising their families.  Both brothers married daughters of Horace Foster and Nancy Libby of Machiasport, Maine.  Another Foster sister, Annie Foster, married James Alvin Flynn of Machiasport, and Annie was the one who reported back to the town a number of births at the Rice farmstead.

As you can see, Freeman Rice also paid taxes on the property he shared with his brother.  In time, Freeman and his family moved out of the farmstead, most likely to Centerville, Maine.  After Judah died his son Clyde Garvey Rice took over the farmstead along with his wife Etta May Burns.  They had two children, Grace Lois Rice and Bernard Francis Rice.  After Clyde died Bernard took over the Rice farmstead.

The photo above is of Bernard Rice by his prized jeep.  Bernard was born legally blind but that did not stop him from taking to the main roads with his jeep every now and than to check on the Rice hunting camp on Eastern Ridge.  He feared getting caught on the roadway so he did not make many trips.  The jeep along with a trailer was mainly used to gather hay and firewood.  The Rice's owned about 100 acres on the land where the house stood, along with property by Bog Lake, Eastern Ridge, and a large section of property by the Northfield one room schoolhouse close to where Virgil Rice Sr. and his wife Vesta Beulah  Dill lived.  Town records show her listed as the Supt. of Schools in Northfield Maine.

Cassis A. "Young" Bagley along side a cow behind the Rice Barn.  Cassie was married to Asa John Bagley and they had several children together.  Asa and Cassie parted ways and she went to work on the Rice farmstead in exchange for room and board.  She tended to Etta Rice as Etta battled cancer, and later tended to Clyde Rice as he lay in bed dying.  Somewhere along the way Cassie and Bernard Rice fell in love and she remained on the farmstead as his live in girlfriend.  Cassie was very thin and frail and had a very low voice, but always had a big smile.  She was buried in the Northfield Cemetery, as she had requested, not far from where Bernard Rice would be buried years later.  She passed away in the Calais hospital from cancer.

Norman Bagley, above, was one of Cassie's son's.  He played a key role in helping get Bernard and Cassie to Machias so they could shop for food and other items.  Cassie's children often came over to the Rice farmstead to visit with her.

Gravestone of Virgil Rice Sr.  A number of Rices are buried in the northfield Cemetery along route 192.  If you stood in one corner of the cemetery you could look across the blueberry fields and see the Rice farmstead years ago.  Sadly the farm burned down shortly after Bernard Rice died, struck by lightning.  The property was sold after the fire and the new owner put up new buildings on the land. 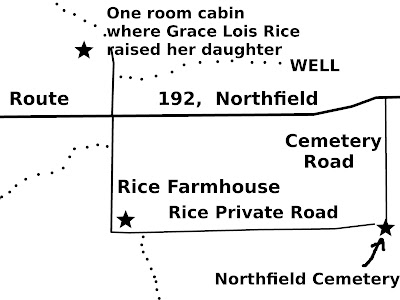 In the drawing you can see the private road the Rices owned that ran across their land to the Northfield cemetery.  On our yearly one to two week visits we would all walk that private road and place flowers on the Rice graves.  Across the main road was the one room cabin Clyde Rice built for his daughter, Grace lois Rice.  It was one room with a bunk bed, a wood stove, a table and some chairs, no plumbing or electricity.  Grace raised her daughter in that one room cabin.  You can also see the path through the woods to the Rice well.  The well by the farmhouse was dry most of the time so you had to carry pails to the well, pull up the buckets of water by hand from a long rope, and carry the water back to the house.  The dirt road behind the farmhouse ran up through the blueberry fields, and once went through the woods all the way to property the Rice's owned on Bog Lake.

This is a photo of Clara Rice, seated, and her mother - Susan Rice.  Not much is known about Clara Rice.

A photo of Cassie Bagley and her son Leslie - not much is known about him other than he died in his  30's.  It is believed he died in a logging accident up by Calais.  This photo was taken on one of his visits to the Rice farmstead.

The one room log cabin Clyde Rice built for his daughter Grace Lois Rice - she would later marry Raymond Lawrence Anthony, have a child, and leave him, returning back to the cabin in Northfield, Maine with her daughter.

A sketch of the log cabin Bernard planed to build on Eastern Ridge.  Bernard drew the picture, and later on build the cabin. 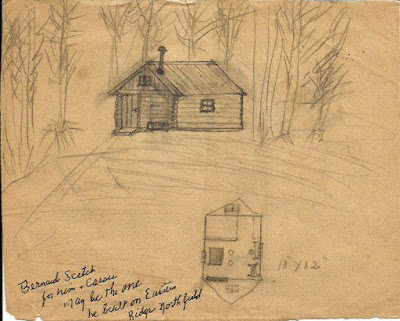 A second drawing of the cabin Bernard planned to build on Eastern Ridge.  On our visits to the Rice farmstead we visited this cabin a number of times with Bernard. 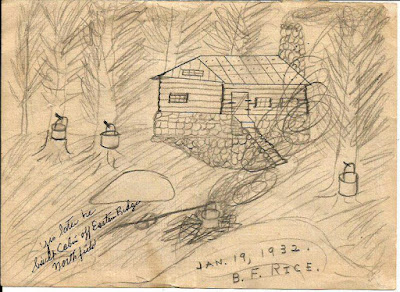 A drawing of a fast car Bernard Rice drew.  He had an obsession with fast cars and many of his poems centered around them.  One of his poems on fast cars was printed in the Machias Newspaper.

This was perhaps one of the best finds in a box full of old papers found at the farmstead after Bernard Rice passed away.  It is an old shopping list Clyde took to town with him.  Notice how low things cost back than... 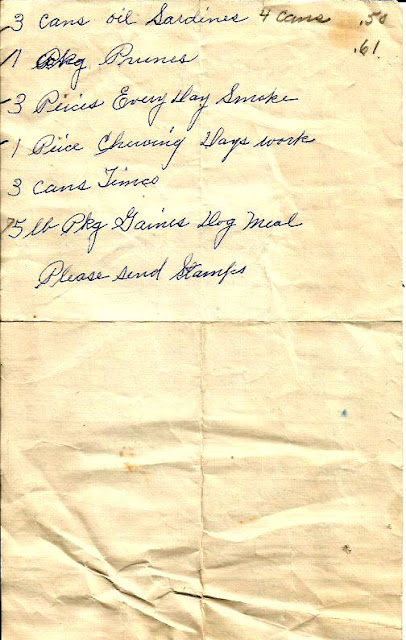 A copy of Clyde Garvey Rice's death cert..  At least two genealogy sites have Clyde's middle name spelled wrong, listing it as Garvin, one site made a note of the correction, the second site refused to correct their mistake. That second site also has Clyde and Etta never having any children - it just goes to show that even Wikitree can't always get things right.